Great Myeloma article on trying to find our "new normal"


I'm LEARNING that I TRIED TOO HARD TOO SOON TO BE TOO NORMAL...
headed to the Cardiologist tomorrow... I can't get rid of these chest pains, breathlessness and sometimes stabbing/jabbing chest pains ....

Posted by Julie No comments:

Too Many, Too Much, Too Overwhelming

I'd like to write another "happy" post like my last one, but I am just overwhelmed by so many people in my life with medical challenges:

A dear family friend (who's like a brother to Jim and me, and another dad to Scott and Alissa) recently suddenly, shockingly passed away from unexpected complications of heart surgery

Another dear family friend is battling uterine/endometrial cancer, and not enjoying the ravages of chemo side effects and losing her hair

I cannot believe how many of my girl - friends are currently battling breast cancer, or in recovery from various types of life-saving treatments... trying to wrap their minds around how cancer destroyed their beautiful bodies

A good friend's Dad (from my high school days) was recently diagnosed with... drum roll... you guessed it...
Multiple Myeloma!

My dad took my sister to ER the other night... she remains hospitalized with unusual electrolyte (and other) blood levels... guess what specialist was sent to her room today.... yep... a Hematologist

Our beautiful doggie Molly is hanging on (barely) as her sinus, head, nose cancerous tumor grows bigger by the day... but we are too torn to make the euthanasia decision when she still follows us and her doggie buddies around the backyard 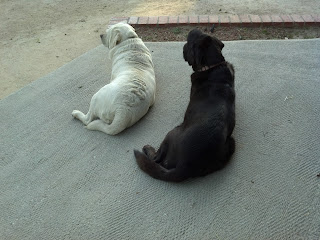 Seriously, look at the size of that awful tumor on Molly's head
And no, that's not her skull or bone structure
It's a stinkin tumor the size of a baseball !!  :(

I continue to correspond with many cancer comrades around the country, referred to me by family and friends. I am thrilled and blessed to have so many new friends and pen-pals.
I just wish the common thread of introduction wasn't CANCER

I just found out from the sweet daughter hosting a (IMF) Myeloma wine-tasting fundraiser for her mom, who has.... of course... you guessed it.... Myeloma... they grew up around the block from where I did !

And we still can't even process the "bad movie" we starred in just this past January... did our son Scott really have bladder cancer surgery???

I'm having chest pains and difficulty breathing... is it physiological or psychological?
I have a Dr's appt next week...

But I will end on a happy note, with a GIANT sigh of relief for my incredibly BRAVE buddy Brian, who's recent brain cancer surgery has been declared SUCCESSFUL !!!

And a positive shout-out to my COC colleagues waging their cancer battles too... may your remission good-news continue forever!!!
Posted by Julie 2 comments: