NO April Fools Joke... This Is For Real!

"April Fools' Day (sometimes called All Fools' Day) is celebrated every year on April 1 by playing practical jokes and spreading hoaxes. The jokes and their victims are called April fools. People playing April Fool jokes expose their prank by shouting "April Fools"! Some newspapers, magazines, and other published media report fake stories, which are usually explained the next day or below the news section in small letters. Although popular since the 19th century, the day is not a public holiday in any country." (From Wikipedia) 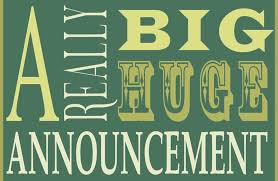 So with a loud cheer and a huge smile on my face, take a look at these results, and THIS IS NO APRIL FOOLS JOKE! I'm still in shock! :)) 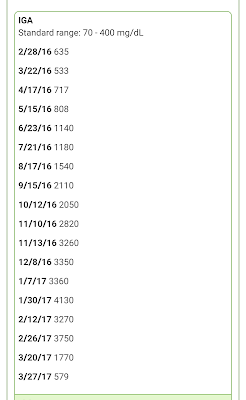 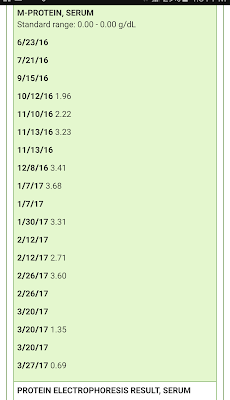 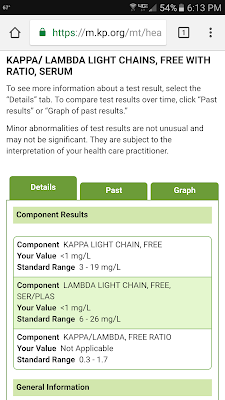 So even though I have been really challenged with crazy side effects, I would say that it's all worth it, right! This week began with extreme fatigue and surprise diarrhea, but my friend Dex steroids quickly took care of that on Tuesday into Wednesday. I crashed late Wed and into Thursday, Friday. I feel I little better today, but "ache" like I have a mini-fever or sunburn, the diarrhea is starting lol, and I have extreme fatigue, but overall, it's better than it's been all of March!

I have completed 5 Darzalex infusions so far, beginning Feb 28.
First infusion was just Darza and Dex.
Second and Third Darza infusions we tried with Velcade subQ shots (and Dex), but the crazy "pseudo fever" skin pain was unbearable, so I quit that.
Fourth and Fifth Darza infusions were with Pomalyst at 3mg (with Dex).
Fortunately, the ouchy skin side effects lessened just a bit just this week. Pom causes extreme fatigue and no helium, but this cocktail combo is better than what I experienced with the Velcade Darza combo. But now that I am several weeks into Darza, I do believe the ouchy fever-like skin pain is Darza, so perhaps Velcade may just be my friend down the road.

Needless to say, I am beyond thrilled with my current Myeloma stats. Pretty incredible right?!! I always seemed to respond well to the meds and treatments, so when my numbers began to soar, I was truly concerned. I know eventually Myeloma will outsmart Darza and Pom, but I sure hope I get many many months of treatment success. To be honest, at the end of 2016, beginning of 2017, I was getting scared. I wondered if my skyrocketing IgA and MProtein meant the "beginning of the end"... It's a crazy way to live, knowing that if your body does not respond to treatment... that's it... 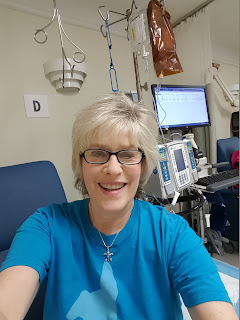 Thank you magical bag of Darza
coursing thru my veins.
outsmarting and killing those evil myeloma cells! 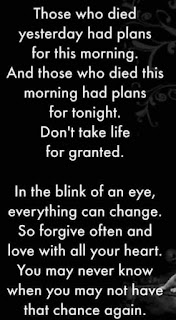 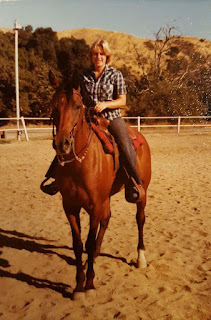 I will always wonder
when Myeloma invaded...
Read this! ^

Thank you for reading, commenting and caring! It means a lot to me that you care and appreciate my posts! Let me know how you are too!

Live happy, live well, and make a difference somewhere, somehow, with someone or something as often as you can