7 years ago today, 7.2.2010, I was admitted to City of Hope hospital to begin my first (and only) Stem Cell Transplant process. Oh was I naive and full of "Whaaateverrrr"..., "I'll be just fine, and do just fine, and this isn't a big deal" attitude... Ha! did I learn differently throughout the 4 weeks I was there! Here's a quick pictorial of my first days as an inpatient: 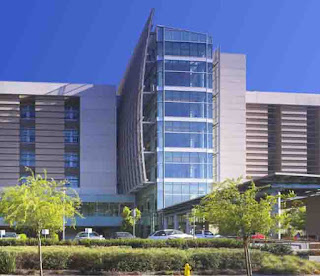 Hello City of Hope hospital:
My home all of July 2010
I started out on the 6th floor, then was moved to the 5th floor
when my Hickman Catheter became really infected and septic,
But that's a story itself! 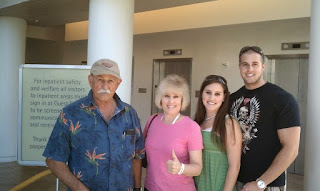 July 2, 2010
Here we are are in "Admitting", looking like we're off on a cruise,
except for hubby Jim, he was pretty traumatized with my situation 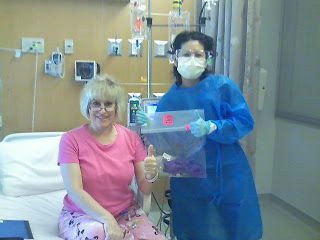 July 3, 2010
Hello killer Melphalan chemo, Day #1
Let the 2nd phase pummeling of myeloma begin,
prior to infusion of my stemmies 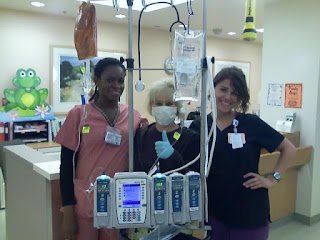 July 4th, 2010
My sweet nurses escorting me to the Fireworks viewing area.
Still clueless me, always having an "out of body experience",
I remember feeling so out of place,
feeling like I was impersonating a patient.
I still had fluffy hair and make up on lol 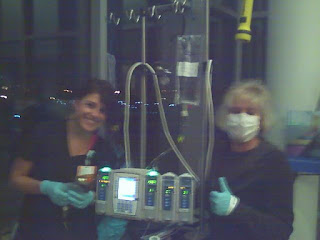 July 4th, 2010
Melphalan Day #2
Fireworks outside, and
"fireworks" to come on my insides...
but little did I know that at this time!

My first few days of hospitalization were rather uneventful. But that of course, was before the "expected" "Neutropenic, Nadir crash". So weird being an inpatient, as I just couldn't grasp how "sick" I really was, and what Myeloma had done to me. My 5 months of Revlimid and Dexamethasone, and one day of IV Cytoxan had brought my cancer involvement down from 67% to 10% and the plan was for Melphalan to finish the job, with my own stem cells eventually regenerating my system. Sure I had plenty of crazy side effects during my initial treatment, but my life was still somewhat "normal"... Oh what a humbling adventure my hospital stay became, and I sure had my "reality adjustment" in the days, weeks to come..  I'll tell you more on July 5th, my 7th SCT anniversary... 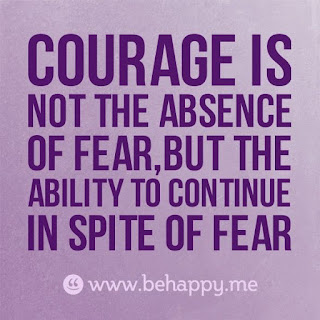 True story... I really did have many fears,
but I always focused on the positive,
hoped for the best,
took one day at a time,
and was very careful to follow exactly
what my Drs and Nurses told me to do.
I just can't believe it's been 7 years...
and I can't believe everything I have been through
in the last 7 years...
But here I am, so lucky, so grateful, to still be telling my story!

Live happy, live well, and make a difference somewhere, somehow, with someone or something as often as you can